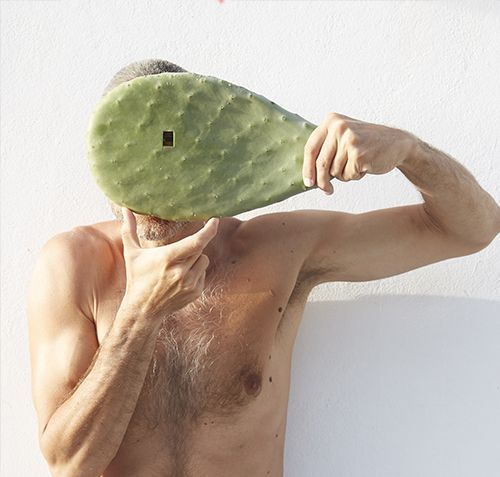 Manuel Vason’s artistic practice explores the relationship between photography and performance, presence and representation. He considers the capturing of a moment as an act of creation, a ritual towards the illusion of immortality, and an exchange between who is in front and who is behind the camera. The collaborative nature of his practice shapes a unique, hybrid art form and generates new vocabularies. His collaborations to date have produced some of the most iconic images of performance and his work has been published and presented internationally.

Vason was born in Padua, Italy in 1974. He became interested in photography while working in a black and white professional darkroom. After having assisted some of the most celebrated fashion photographers of his generation in Milan, New York, Paris, London and Los Angeles, he pursued a Masters degree in Fine Art at Central Saint Martins, University of the Arts, London. Double Exposures is Vason’s fifth book. It follows Oh Lover Boy! (2001), a two-year collaboration with artist Franko B; Exposures (2002), exploring the body in Live Art; Encounters (2007), which complemented his first solo exhibition at Arnolfini, Bristol; and Still Image Moving a self published project commissioned by In Between Time Festival (2010). In 2012 he presented STILL_MÓVIL, a traveling exhibition of  ‘co-creations’ with 45 choreographers from South America. In 2014 he launched the Double Exposures book project at The Photographers Gallery and Tate Britain in London. In 2015, Vason received a grant from Arts Council England for his latest project titled The PhotoPerformer. Vason continues to develop a practice that integrates different media and forms of collaboration.

The PhotoPerformer (2014 – on going): is the name of Vason’s alter-ego. The aim of this project is to merge photography and performance into an hybrid crosspractice through which to further expose, deconstruct and transform his predominant, white, male, privileged perspective. Double Exposures (2012 – 2015): is a new collaborative venture between Manuel Vason and forty-five of the most visually arresting artists working with performance in the UK. For Double Exposures, Vason has worked with two groups of artists, using two distinct types of collaboration, to produce a series of diptychs. Becoming an Image (2013 – on going): Becoming an Image is Vason’s first body of work, which rather than emerging from a series of collaborations with individual artists, develops out of a group environment, in which Vason leads collaborative actions. The point of departure is the concept of the ‘Art of Exchange’. The images produced become a skin with which to cover surfaces and three-dimensional objects.I Believe in (2010 – on going): I believe in is an ongoing project exploring faith as an agent for artistic creation. The project focuses on the liminal space between the fictional and the real, the virtual and the performed fantasy. STILL_MOVIL (2008 – 2011): STILL_MOVIL is Manuel Vason’s first collection of cocreations with 45 choreographers, dancers and movement practitioners. Working with artists across South America the project explores stillness as a durational space in which choreographed movements translate into poses. Each image was conceived as a new contemporary dance piece. Encounters (2002 – 2007): Encounters is Manuel Vason’s second extensive collection of photographic collaborations with artists working in Performance. Through extensive dialogue-based modes of collaboration, beautifully stylized and vividly constructed images question relations and boundaries between the documentation and artwork, body and space, time and memory. Exposures (2000 – 2002): Exposures is Manuel Vason’s first collection of collaborative photographs with nineteen of the most acclaimed and controversial practitioners in Britain in the early 2000s: artists who were disrupting the norm, breaking the rules and provoking debate by exposing the body in all its diversities, difficulties and desires. Live Gallery (1999 – 2003): is Manuel Vason’s first project which led him to transform a photographic session into a public performance. A site-specific project, which took place within different communities and locations and provoked members of the public to perform an action in front a 10 x 8 inches Polaroid camera. The resultant images where immediately displayed as a temporary exhibition.

In this talk Manuel Vason will focus on the vital tension between the act and its image, the visible and the frames we construct to acknowledge it. He will suggest a practice and understanding of photography as a gesture aimed to identify its partiality, its superficiality, its persuasive power and its seductive ability to control. In his opinion photography urges a more critical use and stand to expand its potentiality.